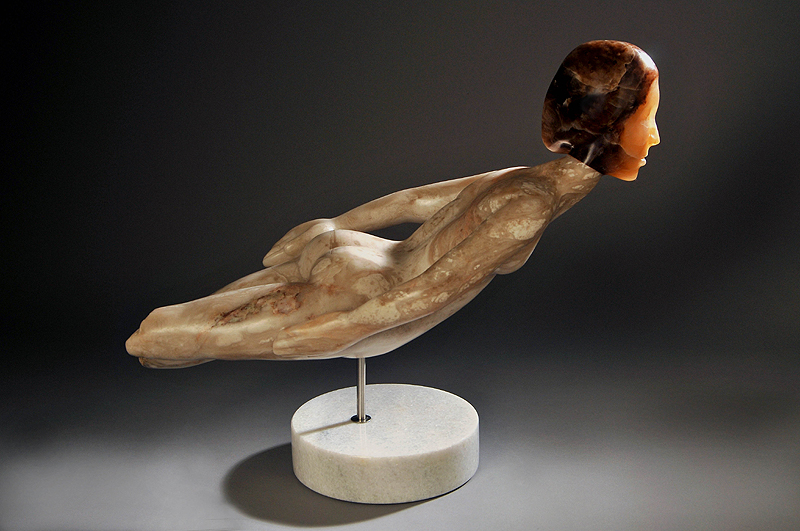 Igneous:
The characteristics of igneous rocks result from the way in which they were formed. Deep in the earth, under the intense heat of volcanic action, magma was forced up through the older solid rock. It then cooled, forming granite, basalt, and diorite.

Granite is very hard stone and difficult to carve. In fact ‘carving’ might not be the right word, since you are not pushing the chisel through the material like you would with the limestone or marble, but are pulverizing the stone, trying to break off chips of crystals (which can be as sharp as glass). Your carving tools must be carbide-tipped to stand up to the wear and tear of working granite. Fine detailed carving is better left to other types of stone.
Diamond saws and cup grinders cut through granite quite easily and can speed up the carving and finishing process. Granite comes in a wide variety of colors, and the crystal size can vary from large and coarse to very fine and dense. Granite takes a high polish and holds up very well outdoors.
Granite is made of quartz crystals and feldspar, which contain silica. Prolonged breathing of silica can cause lung damage. Wear a good respirator that has a tank that lets you breath filtered air when around granite dust. Typical repirators are no good with fine granite dust.

Wonderstone is a rhyolitic composition which is a volcanic rock composed predominantly of volcanic glass particles which have been welded or stuck together by heat and compacted by the weight of overlying material. Alteration of the rock by circulating ground water produces the colorful banding. The brown type looks alot like wood. The marron or yellow-brown color is due to the presence of iron oxides. It is easy to carve and is about the hardness of alabaster.Wonderstone is the term commonly used to describe the stone Pyrophyllite. Most well known is a dark grey to black variety found in Africa, although there are additional occurrences in many countries throughout the world in a variety of colors.

Sedimentary:
As rocks began to erode from wind, rain, and sun, the particles were washed into low-lying areas where the sediment accumulated. In the sea, small plant and animal forms died and drifted to the bottom, adding to the sediment. Over thousands of years, the pressure of these layers cemented the sediment onto limestone or sandstone.

Limestone formed on the sea floor from sediment and the bodies of primitive sea creatures. As you are working, you can find small-fossilized creatures. Limestone is composed primarily of the mineral calcite, or calcium carbonate.
Limestone is easy to carve and will hold small detail work, but is also strong enough to support undercutting. While it does not have the innate beauty of the more colorful stones, a wide variety of textures can be created that can really bring the stone to life. Most limestone is gray or buff. The best carving limestone comes from Indiana. Texas has a yellowish tan limestone that is not consistent in texture. There is a definite ‘grain’ or bed (formed as the layers of sediment stacked upon each other on the sea floor) in limestone. The stone breaks fairly predictably along the bed lines, but less cooperatively going across the bed. Limestone can be polished, but the polish will not last long outdoors .Limestone seems to survive acid rain better than marble, so is a good choice for outdoor sculpture. According to the EPA no respirator is needed.

Sandstone is formed from sedimentary sand held together by silica or calcium carbonate. Sandstone also has a distinct bed direction, and large chips can be broken off when going with the bed. Sandstone tends to wear out your tools quickly. Sandstone contains silica, so a respirator must be worn

Metamorphic:
Metamorphic rocks are formed when a sedimentary layer is exposed to heat and pressure and undergoes a chemical change, which forms a new crystalline material. After metamorphism, limestone becomes marble.

Marble has been the most preferred stone for carving since the time of the ancient Greeks. Marble is moderately hard to work. It will hold very fine detail. American marbles good for carving are found especially in Colorado. Georgia marble is harder to carve and used mainly for architecture. Italian marble is great to carve. Pure marble is white. When minerals as iron and copper oxide are in the stone they add color. When marble is brought to a high polish, its crystalline structure sparkles. It does not hold up well outdoors. Acid rain begins to deteriorate the surface within a few years. A mask should be used when grinding.

Alabaster is a very soft stone for carving and sometimes can flake and split along hidden cracks in the stone. It will take a high polish, which brings out its incredible colors and patterns. In fact the stone is so beautiful that the viewer may overlook your sculptural forms and only admire the stone. Alabaster is a compact form of gypsum. It is white in its pure form and minerals add color. American alabaster is found especially in Colorado, Utah and Mexico. The dust from alabaster may cause an allergic reaction in some people, so wear a respirator when grinding.

Soapstone, or steatite, is soft enough to carve with a knife. It is composed of talc and has a slippery, soapy feel. It will take a polish and hold fine texture detail. It is a good choice for your first stone carving. Some soapstone contains asbestos. Always make sure the piece you carve does not. Some soapstone will fracture with mallet and chisel and should only carved with a grinder.

Virginia Soapstone is much harder soapstone. It is not slippery and contains no asbestos. Its workability, durability and natural resistance to weather and environmental pollution make Virginia Soapstone ideal for modern sculpture and outdoor monuments. It polishes to a dark gray or black. Unlike marble and limestone, Soapstone is nonporous and does not require any sealers or finishes. Unfinished areas exposed to the elements will slowly darken over time but will lighten again when oils are removed. It may be waxed to retain its pleasant gray color or treated for a dark, wet look. Mineral oil is often recommended to darken the stone but we have found that it tends to build up and dulls the surface. Other coatings such as wax can be used but usually require more upkeep. We do not recommend acrylic or urethane coatings under any circumstance.

Calcite – (Calcium Carbonate – H 3.0) Calcite is one of the most common minerals on the earth and makes up or is strongly related to a large part of the stones that are used for sculpture, namely marble and limestone, dolomite, travertine in addition to others. . A beautiful transclucent orange Calcite is currently sold for sculpting. It almost looks like glass. Sometimes has talc-like white veins that can be a problem.

Chlorite – (H 2.0 – 3.0) This term is often used to distinguish a group of similar minerals, but is often treated as one mineral. Most often in shades of green to black, but can be found in other colors. Due to its common occurrence with Talc and its relative softness is sometimes classified as soapstone.

Brucite – (Magnesium Hydroxide – H 2.0 – 2.5) Commonly found in association with dolomite, which will increase the hardness of the stone. Has an appearance most commonly ranging through white, yellow, lime green to dark green and grey. Is mined commercially because of its high magnesium content, but is a somewhat rare mineral.